A Crypto Skeptic makes an NFT

I started and ended my crypto career very early. It started back in 2011, during the early days of Bitcoin. I was running a startup that offered Minecraft Server Hosting, called Tree Puncher. This was back when BTC was worth around $1 USD each. I accepted BTC for fun and kept it all in a “hot wallet”, an amateur move even in 2011. This foray into crypto didn’t last long, in 2012 my hot wallet was part of a theft from a virtual server provider. I try not to think about the fact that there were hundreds of BTC in that wallet. Today it would be worth millions of dollars. I imagine I would be a crypto hype man today if I hadn’t lost that hot wallet!

In the decade since I’ve avoided anything in the crypto space. The only exception is holding a little bit of ETH and BTC with Coinbase. I pay attention to what’s happening in the space, it’s pretty hard to avoid when you work in technology. I thought ICO scams would be the death of crypto, but I have been proven very wrong.

Recently, more people in my life have become more involved in crypto. People I respect in technology are buying into the technology. Venture capitalists are giving crypto startups millions of dollars. There must be something I’m missing here.

I decided my first step back into the world of crypto would be through making an NFT. Even though I don’t believe in NFTs, I want to understand them. They are a fundamental part of the modern crypto world. I may think it’s insane to care about owning a JPG but Snoop Dog disagrees. As the crypto stans love to say, “it’s probably nothing”.

So without further adieu, say hello to the Top Selling Phones NFT!

Where do you sell them?

This was a rabbit hole I didn’t expect to be so deep. I didn’t realize was the 10,000 other options out there. All sorts of different marketplaces and different blockchains.

Some of the biggest options are:

Ethereum leads the pack in the NFT world. The sales on Ethereum on any given day are up to 150x the next top blockchain for NFTs, and more than the rest combined. OpenSea is similarly ranked, dwarfing the rest of the market in daily trading volume.

A lot of marketplaces offer “lazy minting”. This means the NFT doesn’t actually get added to the blockchain until someone buys it for the first time. Until then it’s just a JPG living on a server somewhere… It kind of defeats the purpose, doesn’t it? Mine as well upload it to Imgur.

Gas fees are the reason marketplaces offer other options. People like me want to be able to mint their NFT immediately without having to pay or wait. Polygon and others are L2s, or Layer 2 Rollups. They allow transactions to take place off the main Ethereum network and on a secondary - and much cheaper - network.

Since the whole point of this experiment was to make an NFT, I wasn’t happy with a lazy mint! I decided to go with the Polygon L2 blockchain on the OpenSea marketplace.

What sort of NFT? 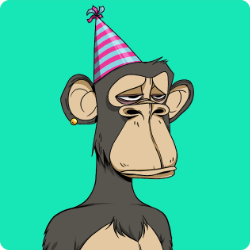 This was a hard decision. I started off by doing research into some of the top-selling NFTs. Quickly I came to the realization that I was not going to be making any sort of “Ape Yacht Club” or “Punk”. Going through the top projects the only art style I connected with and enjoyed was the “pixel art”. It seemed perfect given my origin story in crypto. Most kids these days learned about the idea of pixels and pixel art through Minecraft.

Most of the most popular NFT collections are huge. 10,000 plus items. No one is making that many images by hand. They’re all programmatically generated. You put together a collection of bodies, eyes, hairs, hats, scarves, etc. Then write some code to make every possible photo out of all the parts. I built a basic prototype to test out this approach and learned a lot! This process isn’t anything revolutionary. It also has nothing to do with crypto. But, the bulk generation of these photos is some fun technology to play with. Despite this experiment, I decided to ditch this approach. Too many art assets to create and too many NFTs to deal with. I wanted a minimal project that had around 100 items in it.

Popular NFT projects generally have large communities and grander aspirations than just being an NFT collection. Some have unique rollout plans. For my first small NFT project, all of this was way over my head.

I started poking around the internet for inspiration. I had a lot of failed ideas. Company logos? Done before. High-end sneakers? I know nothing about them. My own photography? No thank you. Disc golf discs? Not enough audience crossover. I do love the idea of disc golf punks though.

Finally, I stumbled upon Wikipedia’s List of best-selling mobile phones. The search stopped here, this was it! I’ve been a phone nerd for my entire adult life and have such fond memories of so many phones on this list. The N-Gage. Apple’s original iPhone. Google’s first Pixel. one of my very first phones, the Nokia 1110. So many gems on this list.

All I had left to do was the time-consuming, but boring, part:

How do you convince someone to buy your NFT?

You get people the ride the hype train! This was one of the most discouraging parts of all my NFT research. Almost worse than their environmental impact. It appears that the vast majority of all NFT projects grow by pyramid scheme-style hype. A lot of projects act like the classic pump and dump schemes. There’s a whole community of “NFT Influencers” that pump projects - after they’ve gotten paid in cash or NFTs.

Since I had no expectation to actually sell any NFTs through this, I didn’t pursue any NFT influencers. I’ve set up a Twitter and Instagram for the project and scheduled an entry to post every day. It’s a few months of easy and automated content with curated hashtags attached. We’ll see if that leads to any traffic but I’m not optimistic.

Should I Buy Your NFT?

No. Please don’t. I built this to learn I am not expecting to make any money from it.

If you’re one of my friends or family, you can have one for free! DM me and I am happy to send you an NFT of your favorite phone. Now you can tell your co-workers you’re on the NFT hype train too.

How do you feel about crypto now?

Well, I definitely don’t think that NFTs are the future, that’s for sure. Especially with Melania Trump getting into the space. Pretty sure that’s the sign an ecosystem is dying.

Despite what a lot of the gaming industry thinks, I definitely do think NFTs have a future there. I have friends who have thousands of dollars in World of Warcraft gear or Counter-Strike Skins. They’re very proud of them and I definitely think they’d want to make it their Twitter Profile Pic.

Owning a gif of a basketball game is never going to replace owning a signed basketball. Like baseball cards, they’ll stay valuable for some. Just more for the collectors than the general public.

My main qualm with most crypto projects is they’re not using crypto to solve problems. They take crypto and use it for a problem it’s not helpful to. A lot of the time, it seems to make them harder or to leave big security holes. NBA Top Shots doesn’t need to be on a blockchain to make money. As someone whose primary motivation is to solve problems, this is a big turn-off.

I expect I’ll likely do another Web3 experiment in my year of projects. Even though I don’t believe in crypto technology, Many people I respect do, and it’s still fun to play with!

Still curious? Can check out my Top Selling Phones NFT on OpenSea.

This post is part of my 2022 Year of Projects! You can read about the project or check out the other posts below.
comments powered by Disqus
#projects #crypto #nft